This piece is part of our blog series on endangered language learners. 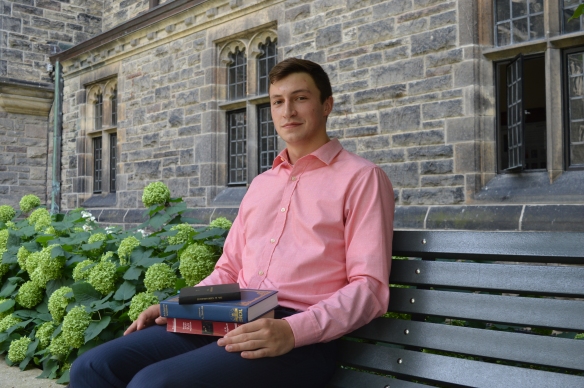 What can you tell us about the language you are studying?

I am learning the Scottish Gaelic language and, as is probably evident from the name, it’s from Scotland. It is closely related to Irish and Manx Gaelic, as all three are descended from Middle Irish. At present it has around 60,000 speakers, the vast majority of whom live in the Northwest of Scotland, though there is a pocket (and ongoing revitalization) in Nova Scotia, as well as individuals and families scattered all over the globe. It’s odd compared to most European languages, as its word order is verb-subject-object (rather than subject-verb-object); it has some uncommon sound patterns, and it lacks a word for yes or no. Another thing I find very interesting within its culture is the polarization or seeming contradiction of speakers’ attitudes towards their language over the past few centuries – on the one hand there seems to be an intense pride, while on the other hand, and often even in the same individuals, a powerful cultural cringe and sense of inferiority.

Why did you choose to study this language?

I had a vague idea that the language existed because of my family in Grey County, Ontario (which had several founding Gaelic communities) and thus had heard mention of Gaelic somewhere there, but ancestry wasn’t really the driver for me. One night when I was 16, I was surfing YouTube and decided off the cuff to search for “Scottish Gaelic Folk Music”. I vividly remember that the first results were Julie Fowls’ Tha Mo Ghaol air Àird a’ Chuain and Ille Dhuinn ‘S Toigh Leam Thu, as well as Kathleen MacInnes’ A Mhic Iain ‘ic Sheumais. I was completely enraptured by those three songs and started learning bits and pieces of the language to better work out lyrics. I kept up on my own, until I found a native speaker my age willing to Facebook message (and months later when I had collected my confidence, Skype) in Gaelic with me. Then, about a year after I had begun, I heard of a conversation circle starting in Guelph, a city near my own. When I came to University of Toronto in September 2014, the Gaelic Society of Toronto was being revived and I got involved there, happening upon a great and growing community. An interest that started with just the music drew me more and more into the Gaelic world, and I was lucky insofar as whenever I was ready to take the next step with my language skills, an opportunity to do just that appeared.

What is your ultimate goal?

I’ve never really had any explicit goals. I started simply because the song lyrics interested me, and each success I’ve had from then on has just driven me onward, and I don’t see nor want an endpoint. There are always more sayings to know, words to revive, and cultural references to understand. A language is much bigger than just a collection of words and structures. In that way, though, my goals at the moment are in working to further develop the Ontarian Gaelic community, reading more and more native Gaelic literature, and continuing my own writings in Gaelic. I’ve found that vague interests such as those tend to turn into milestones if I pursue them long enough, such as having an article I wrote in Gaelic about the revival of the Gaelic Society of Toronto published by the Gaelic e-zine Dàna.

What are your study tools?

I began with the book “Colloquial Scottish Gaelic” and found it very helpful, but I don’t think I ever finished it. I ended up surpassing its lessons with various online resources and eventually just dropped it. From then on I spent time working through the grammar-focused site taic.me.uk in tandem with colloquial speech wherever I could find it. Particularly helpful were radio programs which were aimed at learners and provided transcriptions, as well as Gaelic-language interviews which had been subtitled in Gaelic rather than English. I also trudged my way though some simpler Gaelic novels and began reading poetry, as well as seeking out the then-sparse opportunities to converse with speakers in my area, on top of making new friends in the wider Gaelic world on sites such as Facebook and various topical fora. Finally, I found the songs to be a massive help. Particularly with traditional Gaelic song being acapella, clear modern recordings and easy-to-find lyrics proved a boon, as I could memorize the songs, and then as my skills progressed, suddenly realize I understood what I was singing!

Some would say that your time would be better spent learning a large, global language. Why do you choose to study a small, endangered language?

Well, I don’t think the size of a language has anything to do with how practical it is. I’m also learning Russian and German and French, but I use my Gaelic way more often than all of those languages combined. Also, I find it interesting that the people who would admonish me for learning such a “useless” language instead of Chinese or French are invariably people who can neither speak a “useless” language nor Chinese nor French. Languages are much more than money-makers or resumé-builders, and I think most anyone who has successfully learnt one would tell you that the thought of a raise at work wasn’t their motivating factor.

With that out of the way, what I mean to say is that the number of speakers of the language didn’t factor into my decision to learn it. I learn Gaelic because it’s an incredibly interesting language, an incredibly interesting culture, and its people are fantastic, having produced a great community wherever they have gone. It got me by the soul pretty early on, and each time I get asked “why”, I’m even more taken aback. To me it’s like asking why I’d plant roses, or sing, or go for a stroll on a warm summer night. I like roses, and I like singing, and I like summer nights, goddamit! Likewise, I learn Gaelic because it has already immeasurably enriched my life and continues to do so, surprising me in new ways all the time, and because it has now become as much a part of me as English is. I have friends with whom it would be odd not to speak in Gaelic, and most of the songs I find myself humming in my daily life are in Gaelic. I listen to the news in Gaelic and I read Gaelic novels. It’s opened doors to such incredibly beautiful songs and art, stories and people, that I know if the one asking this question had even an inkling of it, they wouldn’t be asking at all. In short, I can’t imagine my life without it now.

I met a lady at a Gaelic Society event around the new year, a native speaker from Harris, Scotland, and she came to speak to me in Gaelic. After we had spoken but a few minutes, she expressed that she was so happy to see some young people speaking fluent Gaelic and said something to me that really stuck: Tha cleamhnas eadar daoine aig a bheil a’ Ghàidhlig. There is cleamhnas between people who speak Gaelic. “Cleamhnas” means something like a warm bond or deep connection, and she was very right. When you speak a minority language, you immediately have something in common with any other speaker you meet. That’s something you don’t really get if you learn French or Chinese.